Investing & Wine – Here’s A Plan For You!

What a wonderful time of year.  No, I’m not talking about Fall, I’m talking about wine making season lol.  This is one of our dad’s absolute favourite family traditions.   You would never actually know it, because he seems to get so stressed out about every aspect of the process (from what he paid for the grapes, to the quality of the grapes, to making sure my brother and I clear our schedules the moment one of his buddies tells him that the grapes have arrived).  But we know that’s just our dad, and in reality, he enjoys every second of it.

Check out our dad’s wine press.  This thing was originally our grandfather’s.  It has some miles on it, but still does the job!!  Pretty cool, eh! 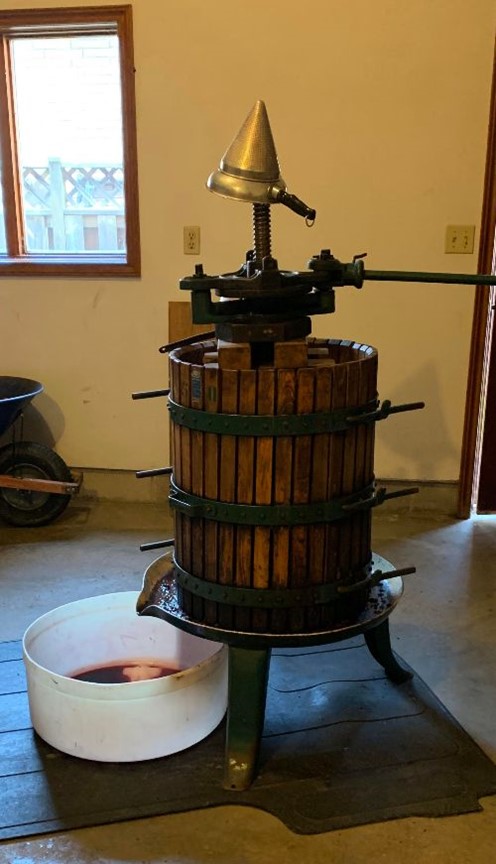 There’s a reason I bring up my family’s wine making tradition.  Please stay with me here because I promise there is a point to this.

Our grandfather and our father have been making wine for decades.  You would think by now they would be world-class vintners (fancy word for somebody who makes wine lo).  But I assure you that is not the case.  They have definitely become much more efficient over they years in the manner in which they tackle the task of winemaking, but in all honesty the wine itself has not gotten much better.  Truthfully, from year to year, the final product is a bit of a crap shoot as far a taste and quality goes.  My brother and I often joke that a successful batch of our dad’s homemade wine is one that you can actually drink without cringing.

My brother and I got involved in the process several years ago.  We don’t love it as much as our father, but we do really enjoy getting to spend that time with him, and carry on the family tradition.

When Mike and I got involved, we couldn’t believe how “old school” out dad’s approach to winemaking really was.  There really was no recipe, and no end goal for the type of wine he wanted to produce.

This was insane to us.  If were going to invest two days in this, we were at least going to ensure that our end result was a glass of wine that you could drink without cringing.

Mike hit the internet hard and went all in on his research.  He even got fancy with it and began combining different recipes and techniques.

Speaking of cringing, you could see it out father’s face every time we strayed from what he had done for years.  He was skeptical to say the least.

Low and behold, year one of Mike and I really getting involved in the process, produced arguably the best batch of wine our father ever made.  He doesn’t outwardly admit it, but the fact that he will no longer make wine without our involvement, and even laminated the recipe, tells us that he’s pretty thrilled about the new approach to winemaking.  Truthfully, we seem to be upping our game a bit every year.  I think we’re actually at the point now where we’ve graduated from striving for “drinkable”, to a wine where people say “not bad”.

Our dad’s winemaking “plan”, is not all that different from a lot people’s financial plan.  Most people blindly follow an outdated plan that was probably passed down to them, and probably has no real, specific objective.

Here’s the plan that is probably being followed my most…

Go to School ->Study hard ->Get good grades -> Get a job -> Get promoted -> Save 15% of your earnings in your RRSP ->Invest your RRSP in a diversified portfolio -> Retire at 65 à Live Happily Ever After.

Although maybe a bit more detailed than my dad’s wine recipe, still just as vague in our humble opinion.
Just like making wine, in life, you get what you put in.  If you put very little thought and effort into your financial plan, then don’t be surprised if in the end you’re the one left cringing.

Whether it’s our Canadian Cashflownaire Plan, or some other financial plan, we really urge you to take an active role in your own financial situation.   Don’t solely rely on your “financial planner’s” one dimensional approach to investing.   There’s a whole world of investing opportunities out there outside of the stocks, bonds and GICs.

And we would love to help you with this process.  If the Cashflownaire Plan is something that appeals to you, become a Cashflownaire Member here, and give us a test-drive.  This recipe is tried, tested and true, and we will help you as much as we can every step of the way.

P.P.S. If you ever cross paths with our father, please do not tell him that we think that he used to make really bad wine.  This is still something that doesn’t really get talked about in our family…